Diego Armando Maradona, to many the best player in history, was born on October 30 1960, in Buenos Aires, Argentina. He began his career at the age of 16 in Argentina Juniors, where he spent five years. After, he spent one year in Boca Juniors.In 1982, Maradona played his first World Cup, which took place in Spain. He scored twice against Hungary, and in the last game against Brazil, being down 3-0, Maradona was showed a red card and got sent off. The Catalonia giants Barcelona didn't hesitate, and after the World Cup signed Maradona. In two years playing in Barcelona, Maradona had 36 appereances and scored 22 goals. Maradona's peak moment was about to take place, when in 1984 he signed for the Italian team Napoli for a record breaking fee (at the time) of $10.48 million. Spending seven years in Napoli, Maradona scored 81 goals in 188 appearences. In the 1986 World Cup in Mexico, Maradona led the Argentinian squad to winning the trophy with a series of incredible performances. The two most famous goals Maradona has scored in his career were scored in the semifinal against England. First, possibly the most controversial goal in the history of soccer is the Hand of God, in which Maradona went up against the English keeper and with his hand un top of his head wacked it in. The second goal, a true masterpiece, happened when Maradona dribbled through half the English team (including the goalie) and then slid it into the goal. Overall, Maradona scored or assisted 10 out of the 14 goals scored by Argentina in the World Cup. After the World Cup in Mexico, Maradona also participated in the 1990 World Cup in Italy and the 1994 World Cup in the United States. For the last years of his career, Maradona played two years in Sevilla, one year in Newell's Old Boys, and two years in Boca Juniors. In his career, Maradona scored a total of 293 goals in a total of 582 games. 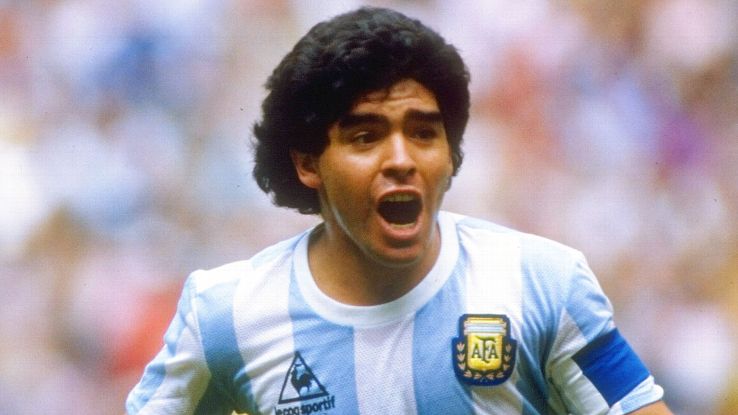